AN EXCERPT FROM: On Reading & How Reading Handke + as experiencing pertains to the plays

In 1972-73 I had half a year between jobs and took a six month freighter trip half way around the world and back and read both steamer trunks worth of books I had taken along, and translated two volumes worth of Enzensberger essays and Handke’s Quodlibet. I had started to translate all of Peter Handke’s early plays in the late 60s, an experience I have memorialized here:
http://www.handketrans.scriptmania.com/

But the experience of the how these plays affect an audience and me I will define now with whatever precision I am capble of, since I don’t want that term, that will come into different play with the particular READING experiences I will address later to reside in too vague and all purpose cloud, not if I can help it.
After the performance of Handke’s PUBLIC INSULT, as I now call Offending the Audience [Publikumsbeschimpfung] in my translation at the Goethe House, 1969, a psychoanalyst mentioned to me that the audience had received an hour’s worth of the best group therapy in making it so utterly self-conscious. Right on! The insults at the end are the joke, the xxx to get the audience to attend the scandal, but it is the hour of being addressed, being told everything it did, every thing that it feels and thought that produces self-consciousness, about being addressed, about being in the crossfire of words, about being in the world, on  the world stage. In other words, P.I. has a profound didactic and psychological impact. That constitutes its experiential component.               The experience of SELF-ACCUSATION, aside the enjoyment of how its series work, would be of the sheer excess, to the point of utter ridiculousness that self-berating can be taken. It makes you conscious, consciously, or at least subliminally of that feature of the working of our conscience. The fact that it does so playfully works to its advantage. My Foot My Tutor, Handke’s first play of pure action but no words but with sounds, demonstrates a               sado-masochistic power relationship, master slave, with all kinds of sounds – sawing, water trickling – acquiring quite sinister associations. QUODLIBET [As You Like It] works on the principle of auditory hallucination – the king’s conscience it wants to catch with its ambiguities is that of the audience’s mishearing. KASPAR works as a word torture that an audience empathize with  or not I suppose, it also functions as an  education in the tragedy of the prison house of grammar. The effect of RIDE ACROSS LAKE CONSTANCE is very               different. The play presents itself as that of actors assuming the roles of older actors, a kind of KASPAR en masse on first blush, everone wants to be “someone who was somebody once upon a time.” But RIDE is chiefly a language game where sentences are handed off and queried. As compared to the other early Handke plays I had not the faintest how it would play or what my experience of it would be: Handke's other early texts I knew what they would do to an audience because I had directed them and had seen Herbert Berghof direct them. Nor had I               participated in rehearsals – I was more interested in a woman and spending time with her in Woodstock. It happens. I took Max and Marianne Frisch to the               premiere as well as my woman. Max did not care for the play at all. It seemed to make him angry. I forgot what Marianne’s and Cathy’s               reactions were. The performance transported                 me into a state of pure stasis. The 90 minute juggling act, the various, sometimes sinister games that the half dozen actors playing actors had played – “The drawer is stuck”, “Let the drawer remain stuck.” – had the effect of cleaning                 all the crap in my mind out of it. It was not a sublime experience, it was one of pure stasis, of pure being you might say, as some of Handke’s texts, too, have effected, which is why I am trying to formulate this particular experience which Handke achieves once more in the summa of his early happenings, for that is what they are, THE HOUR WE KNEW NOTHING OF EACH                 OTHER, there using nothing but images, a succession of them to discombobulate the inured mind into re-experiencing the world as something fabulous. I saw RIDE  a few more  times full length and then only needed to go for a ten minute "hit" as it were, to feel liberated during its five week run. I couldn't account for the experience, as I might for a drug hit, and did not experience anything like it until what is called "a good hour" in analysis.  The                 experience of stasis  was produced by the sheer playfulness of the illogicality of what was transpiring on stage, that might also be called, an utter anti-boulevard boulevard play.  Richard Gilman pointing out that Handke in RIDE used Wittgensteinian querying does not really help, Handke might have used legal procedures, the resulting absurdity does the trick of being utterly liberating, of wiping the slate clean.

The closest affinity would by Ionesco’s absurdities, but it is an affinity only. Ioneso’s Cantrarice Chauve & La Lecon do not perform a catharsis, which is what Ride and Hour, which are not absurd in the least. Pure playfulness. The effect of THE HOUR WE KNEW NOTHING ABOUT EACH OTHER is the same. Clean, reborn. With the effect of Handke's texts on his readers state of mind, these qualities need to be a major aspect of reviewing his ever more                 artful works.  These plays of course do not play on one continuum, they have a movement, and each has that moment - the party moment, when a party has it highpoint, nearly every party has                 it, and it is entirely    unpredictable. One reviewer in Chicago got it right, and wrote: "Just describe the experience." It it there that Handke's work intersects with "happenings." Obviously my approach owes something to Susan Sontag's AGAINST INTERPRETATION and to McLuhan, but the experience, say of Handke providing what Peter Strasser called "FREUDENSTOFF", can be detailed in this instance and I propose to detail the different                 magical experiences to  be had with some of Handke’s texts.

No matter the extraordinary experiences that these plays can be for an audience translating was a lot of verbal fun that  involved little emotional investment. As I read the Handke texts subsequent to Goalie’s Anxiety at the Penalty Kick, the books of his critical first Paris period, A Moment               of True Feeling, Weight of the World, Left-Handed Woman I noticed that these texts seemed to induce depression which the end of these books then seemed to lift, I noticed but did not give, probably lacked the time, to delve more deeply aside from noting the why and   wherefores of what I had noted. I recall that the novelist Jim Krusoe telling me of having a similar experience, that was in the late 80s, on the West Coast. But the first really major experience with a Handke text was with the title novel of the             triptych that is published in the United States as A Slow Homecomig: and its opening, the Alaska chapter. I try to account for this by telling myself that


Posted by SUMMA POLITICO at 8:49 PM No comments:

THEY ARE DYING OUT

Photos productions can be found at:

Posted by SUMMA POLITICO at 9:25 AM 9 comments: 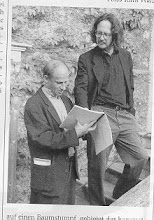